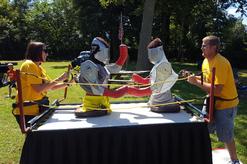 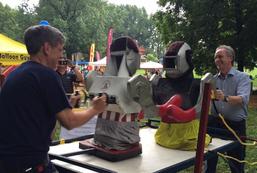 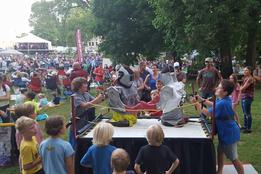 ​​    In September 2014, we acquired a set of very rare, boxing robots.  The design of these dates back to the 1970's and are basically a giant set of Rock' em Sock'em Robots. Each robot is forty two  inches tall and weighs about 90 pounds. Using Google, Facebook and Bing, I  located about twenty of these in the United States. The robots have counterweights that makes it seems like you are really boxing. Guest from five to ninety have had a blast with them. You,  are strapped into the robot and make the robot move, left, right and front to rear.   We can "dress" them with your favorite clothing or business logo's.

No power is required to run the Boxing Robots, they take up a space eleven feet by four  feet, and I recommend a you allow a considerable amount of space for people to watch.

My Fun Over Louisville has been in business since 2008 and serves the Louisville KY metro area.  All information copyrighted by Marty Goldsmith 2008.  502.356.0042